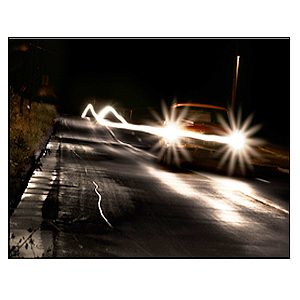 Have you ever been driving at night when a car with bright, blinding, and slightly bluish headlights makes you squint or turn away for a few seconds until it passes? The odds are you have, and this temporary blindness can pose a serious danger for a driver and their passengers.

The headlights in question are called High Intensity Discharge (HID) Xenon Headlight Systems. HID lights are up to three times brighter than the traditional halogen bulbs found in most cars, and older drivers or drivers with a vision impairment report being dazzled and temporarily blinded by them.

Drivers can be ticketed for improper use of high beams—leaving them on or flashing them at oncoming traffic—but what about intense low beams? Although some of these blinding headlights are just as bright as high beams, they are perfectly legal, despite the fact that opponents argue that they increase the risk of an auto accident.

One factor which makes this issue difficult to resolve is both supporters and opponents of HID headlights are right. Xenon bulbs are measurably brighter and produce more glare, but they also meet federal illumination standards and fall below the government’s maximum safety level.

“Xenon headlight systems project more light than conventional halogen headlights,” says Martin Mainster, MD, who conducted research testing HID manufacturers’ claims that their lights do not pose a risk to other drivers. “Therefore, drivers of cars equipped with HID headlights benefit from increased road visibility and greater driving safety because they can see hazards earlier and have more time to respond.”

But while drivers with HID lights may benefit from improved visibility at night or during storms, it comes at a converse cost to other drivers, whose visibility is reduced.

“But for the elderly in particular, who are already handicapped by night-time driving difficulties, glare from HID headlight encounters on two-lane roads can be dangerous,” said Dr. Mainster.

Part of the problem is more and more people are going to auto parts stores and installing HID lights themselves by watching YouTube tutorials. But what these tutorials fail to do is regulate whether the lights being installed are federally approved or at an appropriate angle, causing headlights to shine too brightly or directly into the eyes of oncoming drivers.

Read more about the federal regulations on headlights, and contact a car accident attorney if you or a loved one are the victims an auto collision caused by improper or abnormally bright headlights.

It was great working with the Babcock Law Firm
Workers Compensation  |  Aurora
Retained after 3,000 lb. compressor fell on worker's legs facilitating payment of bills and other issues including negotiating settlement.
"Stephanie handled my work comp case and did a wonderful job of keeping me informed during the whole ..."
Spencer, Verified Customer