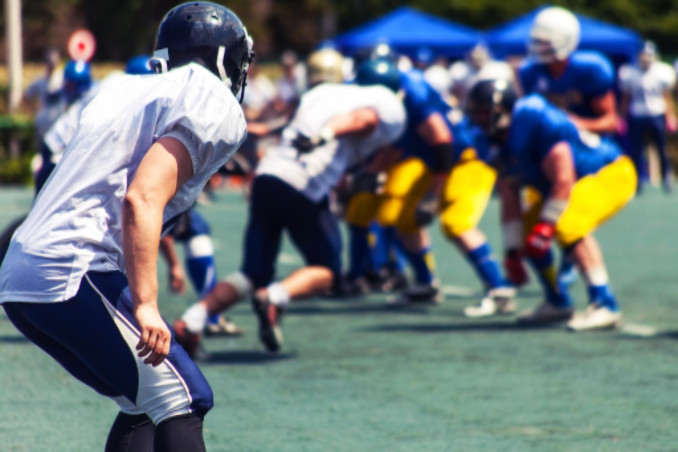 Even if you’re not a football enthusiast, you’ve likely heard some of the hype surrounding football and head injuries. The NFL has taken a lot of heat for recent research done on concussions in football because of its supposed efforts to steer research findings in favor of the organization.

Head injuries have become a heightened concern throughout the football community, from NFL players down to high school students and parents. High school football accounts for about 47% of all sports-related concussions and 33% of players sustain two or more concussions per year. When left undetected, these concussions can cause long-term damage.

What is the biggest concern? There has been a proven connection between football-related head injuries and neurological issues, primarily a degenerative brain disease known as CTE (chronic traumatic encephalopathy). CTE occurs as a result of multiple head injuries or concussions.

The brain of an individual who suffers from chronic traumatic encephalopathy gradually deteriorates and will over time end up losing mass. Certain areas of the brain are particularly liable to atrophy, though other areas are prone to becoming enlarged. Another aspect of CTE is that some areas of the brain experience an accumulation of tau protein, a substance which serves to stabilize cellular structure in the neurons but which may become defective and subsequently may cause major interference with the function of the neurons.

CTE cannot be officially diagnosed until after a person has passed away, but symptoms to look for include:

The difficult thing about CTE is that not everyone who sustains multiple head injuries develops it. This makes it hard to understand all of the factors that cause it. However, watching for and recognizing these signs and symptoms can possibly help to slow the disease’s progression.

If you or your loved one has experienced multiple sports-related concussions or possible brain damage, you need an experienced Colorado personal injury lawyer to navigate through the legal system and get the compensation you need. To read testimonies about how Mack Babcock has successfully assisted others, click here.

Great
Workers Compensation  |  Littleton
Retained following shoulder injury. Objected to Final Admission and negotiated resolution.
"Very professional. Kept me informed of the process and where we were at in the case."
Dave, Verified Customer