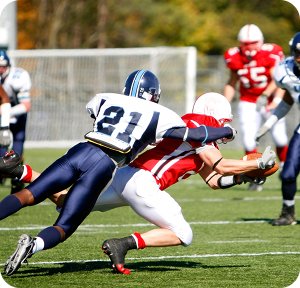 An unprecedented Youth Concussion Act has been passed here in Colorado that regulates how schools handle concussions in their student athletes. But unlike other laws, this piece of legislation is personal. It comes from the heart of a determined Colorado mom.

For Kelli Jantz, it all started back in 2004, on a seemingly normal Saturday in mid-September. Her 14-year-old son, Jake Snakenberg, a freshman football player at Grandview High, had been injured in a game a week earlier. Jake assured his mom that he was okay to play.

“I don’t know if Jake was fine (or) if he wasn’t. He wanted to play,” Jantz told The Denver Post three years ago. “We didn’t see anything.”

Later during the game, Jake, a fullback, took a couple hits—nothing serious, just regular football tackles. On the second hit, though, he fell. Jantz could see that something wasn’t right. The refs stopped the game and Jake tried to get back up, but wobbled and went down again.

Within seven minutes, paramedics were on the field and Jake was flown to Swedish Medical Center, where he was diagnosed with a major brain injury. The next day, he died from complications resulting from Second Impact Syndrome.

In 2012, Jantz succeeded in helping to bring about a cutting-edge standard for concussion management of high school athletes through the Jake Snakenberg Youth Concussion Act. Under the new law, coaches are now required to receive instruction on how to recognize signs of concussions, as well as remove students from play who are suspected of having a concussion and get a medical professional’s approval before letting the student return to the game.

Following an impact to the head, symptoms of a concussion are known to be:

Jantz recently spoke about her own tragic experience with concussions at a seminar at Colorado Mesa University on Saturday (Jan. 18). Through Jantz’s passion to educate others about the dangers of head injuries, the legacy of her son lives on – hopefully preventing another mom from having to suffer her same pain.

If you or someone you know shows signs of one of these symptoms due to an accident, seek medical attention immediately. Then contact a Colorado brain injury attorney for a free consultation.

Experience with Babcock Law firm
Workers Compensation  |  Aurora
Retained following a fall at work and settled before Respondent's Division IME.
"I had the privilege of working with Stephanie Tucker. She was an excellent attorney, she kept me up-to-date ..."
Tirza, Verified Customer